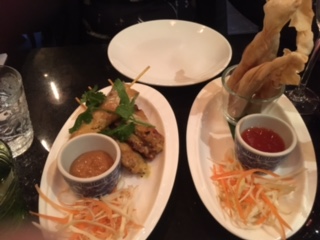 I took my friend out for dinner for her 40th birthday (for the record, she’s older than me) and as she loves Thai food, the new Thai restaurant in Tonbridge, Gaab Kao, was an obvious choice.  We were so excited but, left feeling rather underwhelmed…

It was a Monday evening & the restaurant had been open for just over a week.  When we arrived at 7.30pm the restaurant was pretty busy – a great sign.  There was a big group with children, even those that still need a high chair (which was provided by the restaurant) so it was good to see that Gaab Kao is embracing family dining.  (For those of you who don’t care two hoots about family dining, those two children were the only ones in there!)

We were seated at a table for two next to another table for two & really, we were a bit too close (niggle one).  Throughout the meal we could easily eavesdrop on our neighbour’s conversation & there were times when we could tell they were listening to our highly intellectual chat about my friend’s 40th party that I’d missed.  It isn’t a very large restaurant so dining is rather cosy.

The menu is really varied but not overwhelming, although it didn’t make it any easier to choose.  We finally settled on the Gai Satay (chicken skewers with spicy peanut sauce) & some good ol’ spring rolls, Poh Pai Tord for our starters: they’re traditional & we thought they’d be a good benchmark.  The chicken of the Gai Satay was moist and tender, and the satay sauce was really peanutty, not too runny & not too thick.  The spring rolls (shown on the right of the picture) were presented with a modern twist, packed full of the veggie filling you’re expecting.

The starters were nice but not remarkable so we were hoping to be more impressed with the main course.  I’m a sucker for mushrooms so had the chicken Pad Nam Mun Hoi (stir-fried chicken in oyster sauce with broccoli, mushroom & onion) with sticky rice, the rice served authentically in the bag.  My friend had the Panang curry with chicken: at first bite, it was creamy and full of interesting flavours, and then the heat hit you very subtly at the end (there are little red squares on the menu to signify the heat of the dish). Coconut rice accompanied the Panang curry: the coconut was extremely subtle…verging on non-existent.

Throughout our time in Gaab Kao, the service was excellent.  The waiting staff are trying to be one step ahead of their diners: free flowing water (I don’t mean the plumbing –  in some other places you have to keep asking for water top-ups); doggy bags offered really discreetly, no big fuss; giving us time to taste our food before checking our meals were OK (again I find in other places, the waiting staff are over too promptly).  They never felt intrusive.  My second niggle though, would be that our mains were ready very quickly after our starters had been cleared; this might not be the place for a long, lazy meal.

Something that may upset some of you is that there isn’t a dessert menu: in Thailand they don’t ‘do’ dessert like we do & tend to eat fresh fruit or a ‘dessert’ made of sticky rice & banana, & it’s the latter that’s on offer at Gaab Kao.  We were rather full & so declined pud, preferring to quaff more prosecco.

The service was excellent but aside from that, there wasn’t anything outstanding to report and that’s a problem for me.  The word that springs to mind to describe the food is ‘nice’, not amazing or delicious, and I certainly don’t feel as though I’ll rush to go back.  I chatted to the manager of Gaab Kao about my experience and he couldn’t think of a reason why the food may have not been up to scratch that night, except that perhaps it was still early days.  I’m not sure how long the term ‘early days’ applies but I will go back in a few months’ time to see how things are going….

There are wine trails through Australia, fromage trails around France and now …

*** EAT AROUND TONBRIDGE OFFERS ***…5 pubs around Tonbridge with outside seating