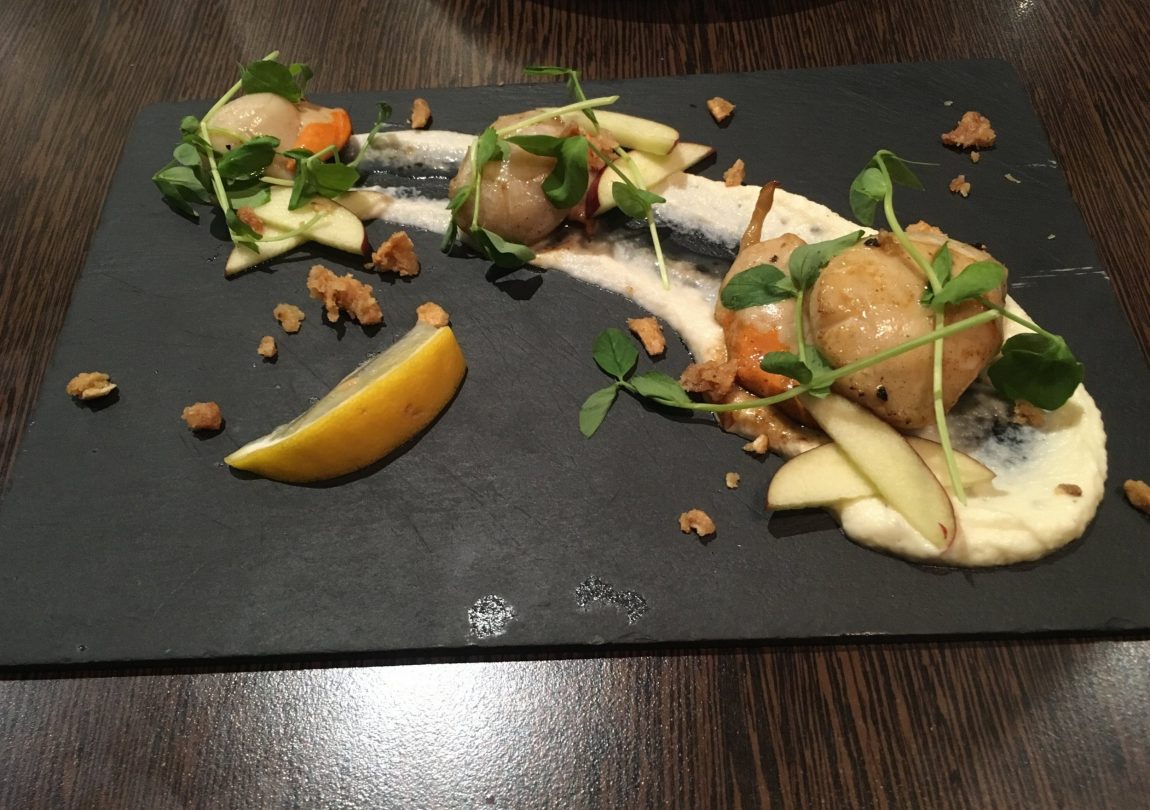 This Friday is Good Friday and on this day, typically, we eat fish and so it seemed appropriate to tell you about my recent fishy experience.

I was kindly invited to The Rose Revived in Hadlow for their new weekly night of Fishy Friday.  Snow had interfered with plans but finally my friend (who LOVES fish) and I (I love fish too!) made it to this country pub which has quite literally been revived, relaunching February 2017.

We were given a very warm welcome by the bar man who was busy serving someone else – the pub was nicely busy: not ‘rammed’ but enough of a hum of chatter to create an atmosphere.  We were shown to our table which was in the more modern part of the pub at the back.  There’s more space in here and, although there were several other tables, it didn’t have quite the same warmth as the front of the pub.  The space in here, though, would lend itself well to big groups for sure.

The menu for Fishy Friday is small with only a few choices but that in my mind is excellent.  In Gordon Ramsey’s ‘Kitchen Nightmares’, he used to criticise restaurants trying to offer too much, saying that they were at risk of compromising on quality.  His words echo in my mind every time I pick up a menu.

We had to ask the waiting staff what a Sussex Smokie was and although they didn’t know straightaway, they were speedy with the answer – smoked fish with layers of tomato and cheese on top, according to them.  We had decided to try it anyway, along with both starters and the sea bream.

So the starters, both tasty but for me the scallops won hands down: the combination of flavours and textures was superb – the smoothness & tang of the celeriac puree, the crunch of the pork scratchings and the sweetness of the apples – and of course the scallops were cooked perfectly.  I ate it very slowly – always a sign that I’m loving it and don’t want to finish it!  The prawns were good too, despite the large pieces of ginger, but the scallops were on another level. 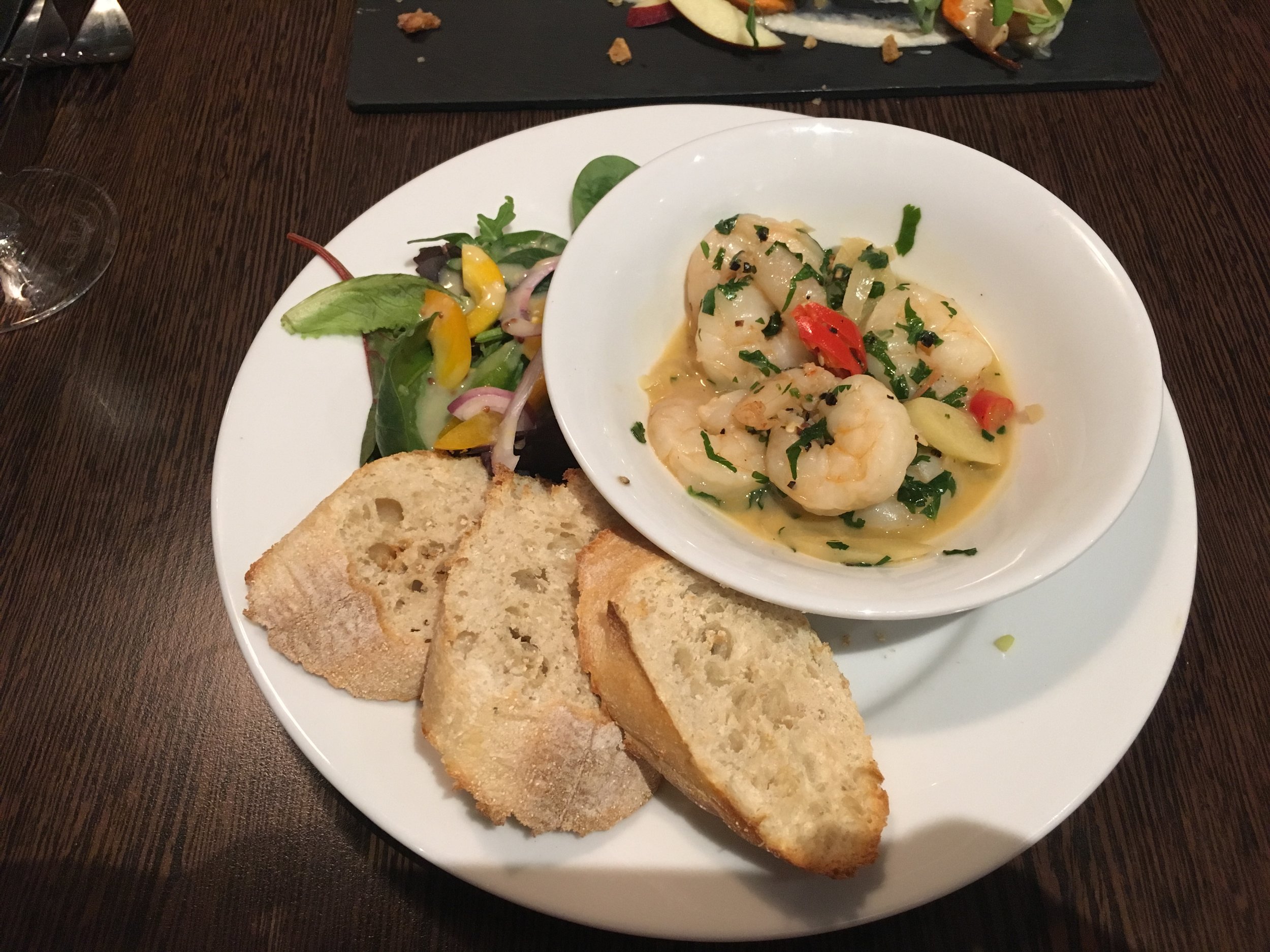 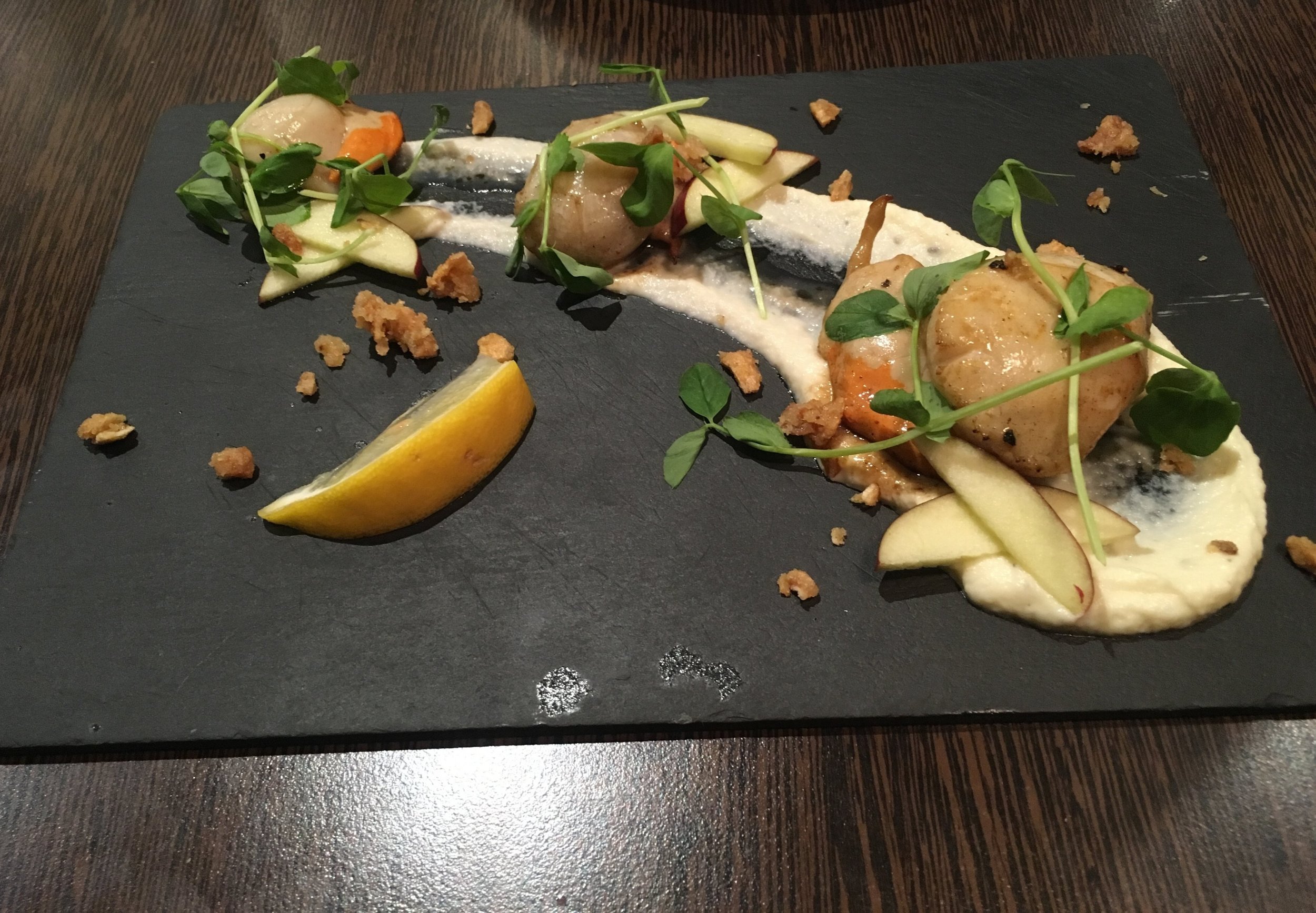 And similarly with the mains …

The sea bream was sooo good – nicely presented, delicious, buttery fish that flaked away from the skin easily, on a crushed new potato, garlic and spinach ‘bed’ which was very moreish.  Again, I ate it slowly.  The asparagus on the side were amazing too – a generous portion char grilled in salt. 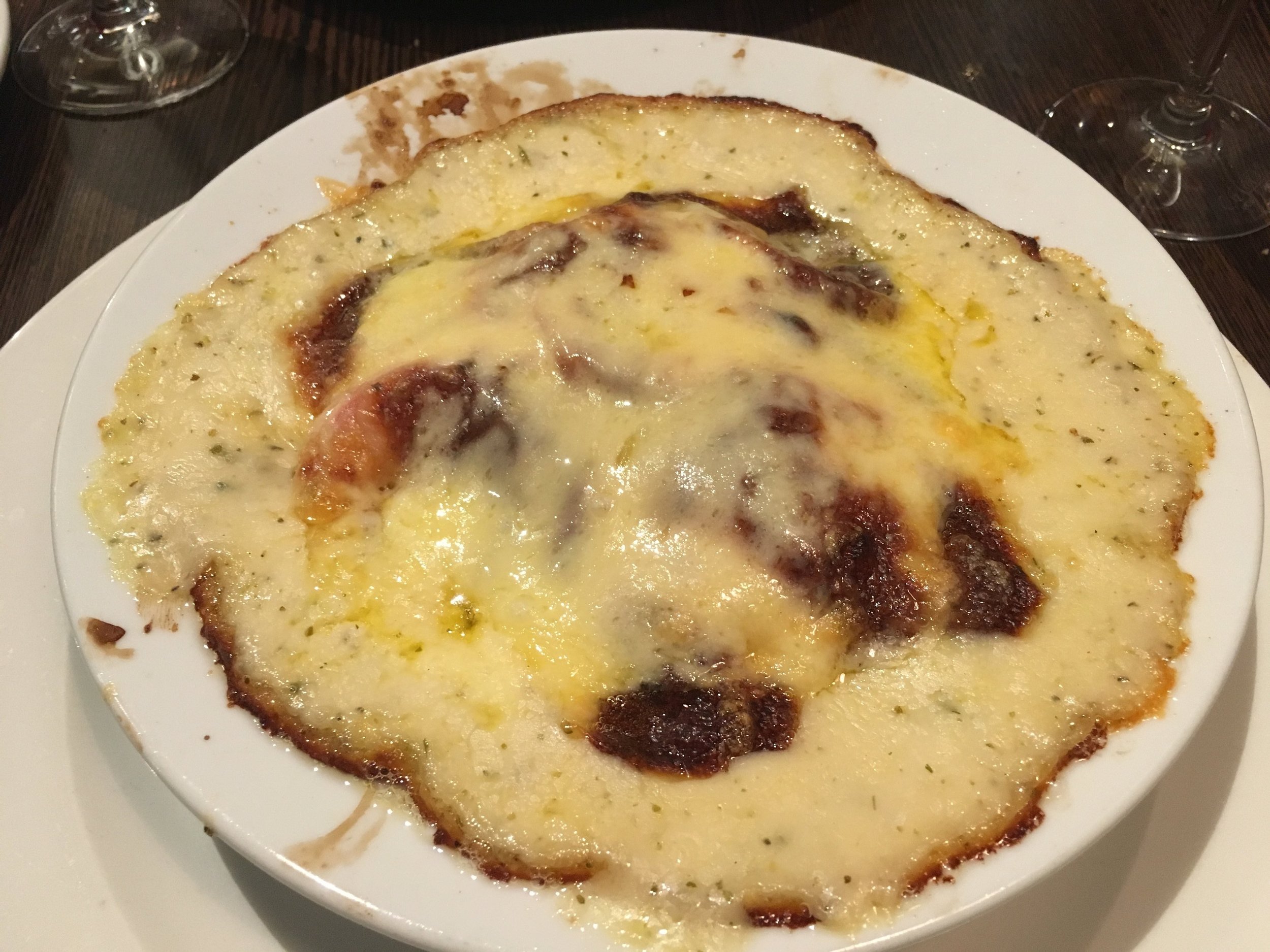 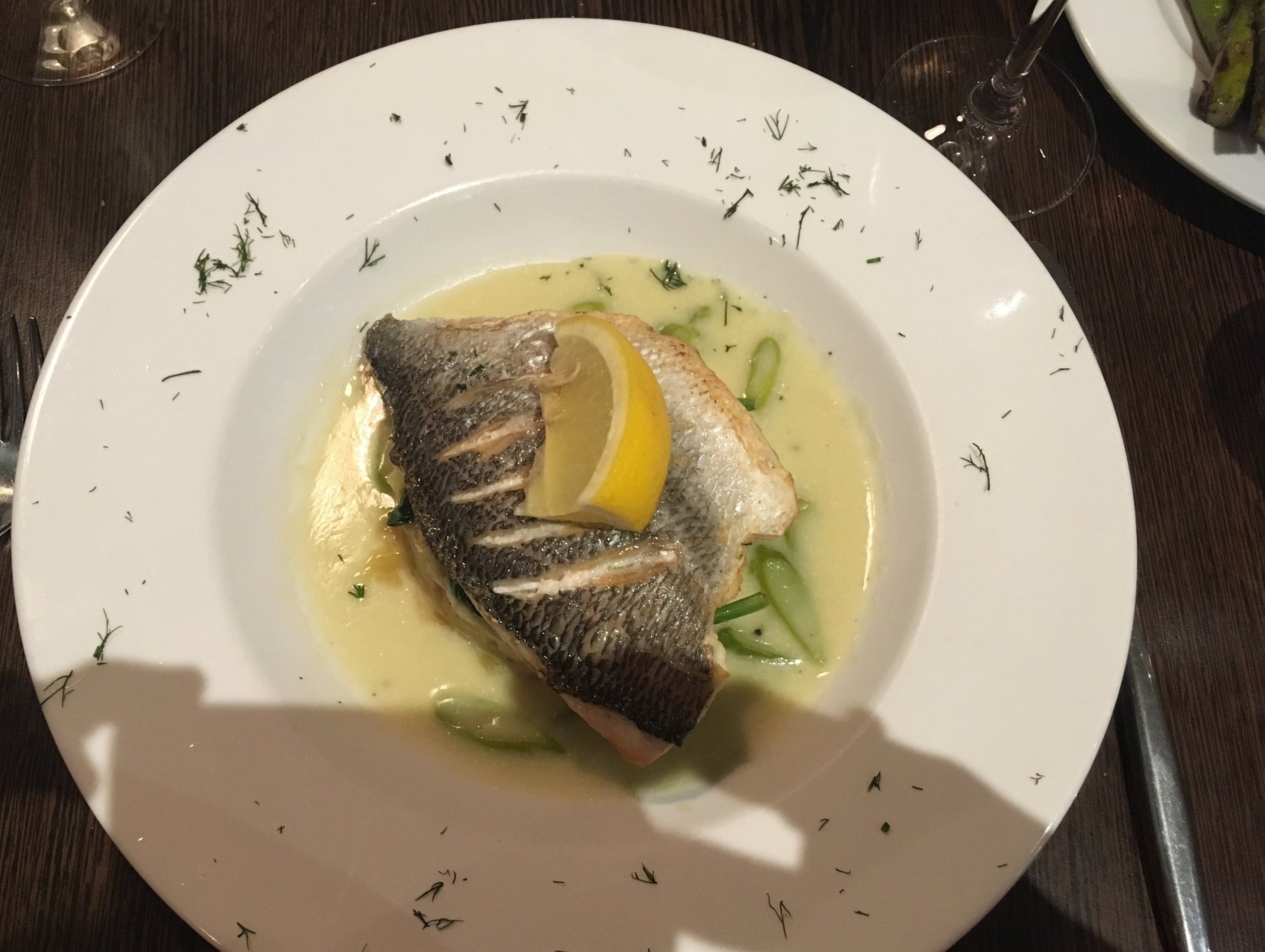 The Sussex Smokie is hard to present well I think and it lived up to its description by the waiting staff.  There was fish, tomatoes and melted cheese but it lacked any depth of flavour in my opinion, I just tasted the cheese.

I would love to say that we finished the evening with a pudding but we didn’t, we were full!  We had enjoyed our meal though and the waiting staff were great throughout – very attentive but not coming over every five minutes.

It was a meal of two halves but our overriding memory is positive and I will return.

The Rose Revived kindly paid for our food but it would have come to £61.70 including three glasses of Sauvignon Blanc and a ginger beer, but excluding tip.

Where are you going to eat this Easter?  Do let me know!

Not your average school dinner! The Artisan, Tonbridge, 8 March 2018