The landscape of Tonbridge is changing – just a little 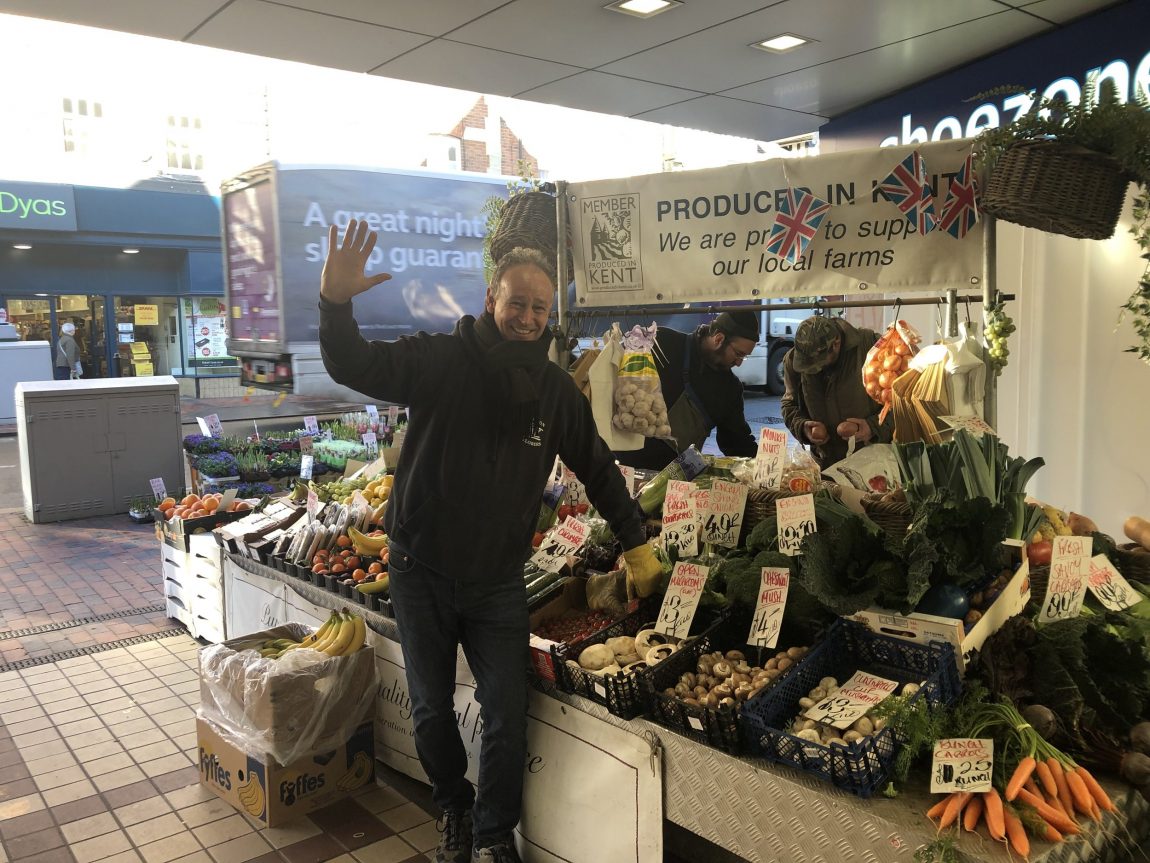 If you like good food then you probably know that quality, fresh ingredients matter. We’re so lucky in Tonbridge that we have several great butchers, a fishmonger, fresh greengrocer plus fresh bread too! But one of them is going through a bit of a change and they want to shout about it! The big guys have come in and told them to move on…

Rob Smith believes in local. The perma-smile, fifth generation greengrocer who owns and manages the fruit and veg stall and the florist near Finch House in Tonbridge, buys locally as much as possible. He’s driving around the Kent countryside whilst you’re turning over in bed, sourcing quality produce from local farmers and producers. He sometimes has to drive up to London too to source other bits and pieces at ridiculous o’clock (he can read the market – excuse the pun – and knows what his Tonbridge customers and local food establishments are after!) and still, he’s always smiling.

Back in the day, Rob’s ancestors could boast that they had the most successful chain of greengrocers in the south east and they were the biggest buyer of flowers from New Covent Garden! Seventy years ago, his family had two greengrocers in Tunbridge Wells – one in the old opera house and one on the High Street, and then they moved to Tonbridge in the 1970s to occupy the building that is now Graeme Webb Hairdressers. In the 1980s when The Pavilion opened and was all shiny and new, the Smith family decided to shut the shop, concentrate on flowers and exploit the footfall of this new walkthrough that today connects the Sainsbury’s car park with Tonbridge High Street. A little while later they were asked to open another stall and there they’ve been ever since – selling flowers and your local five a day for peanuts (really – very reasonably priced superior produce and you’ll save some cash compared to the supermarket prices!).

But the owners of The Pavilion have told Rob that he needs to move. Don’t despair – they’re not moving very far!

Over Easter weekend, the florist stall will be dismantled as the flowers move into a dedicated shop, fittingly called Flowersmiths and there will be a smaller produce stall outside Santander. Rob wants to shout about it due to their current seemingly prime position right on the pavement by the road and he doesn’t want to lose customers. “We’ve been here for thirty odd years and we’re part of the town, part of the street furniture! We have a fantastic customer base and supply many local businesses too – we just don’t want our customers to think that we’ve upped and gone when we’re really just at the other end of the walkway.”

If you haven’t bought from Rob, do stop and buy your local produce from him. Much of it comes in paper bags rather than plastic which is another bonus on top of the quality, low carbon footprint and price. And if you’re still unsure, let me tell you that you’ll be hard pushed to find an eating establishment on Tonbridge High Street that doesn’t use Rob too – from Fuggles to The Bakehouse to Finch House and Sulston’s Kitchen and many places in between.

Rob is disappointed that he’s having to move but also pragmatic about the next chapter in his family’s retail story. Make sure you pop by and buy something – remember to support local and support independent.

Why awards are so important!