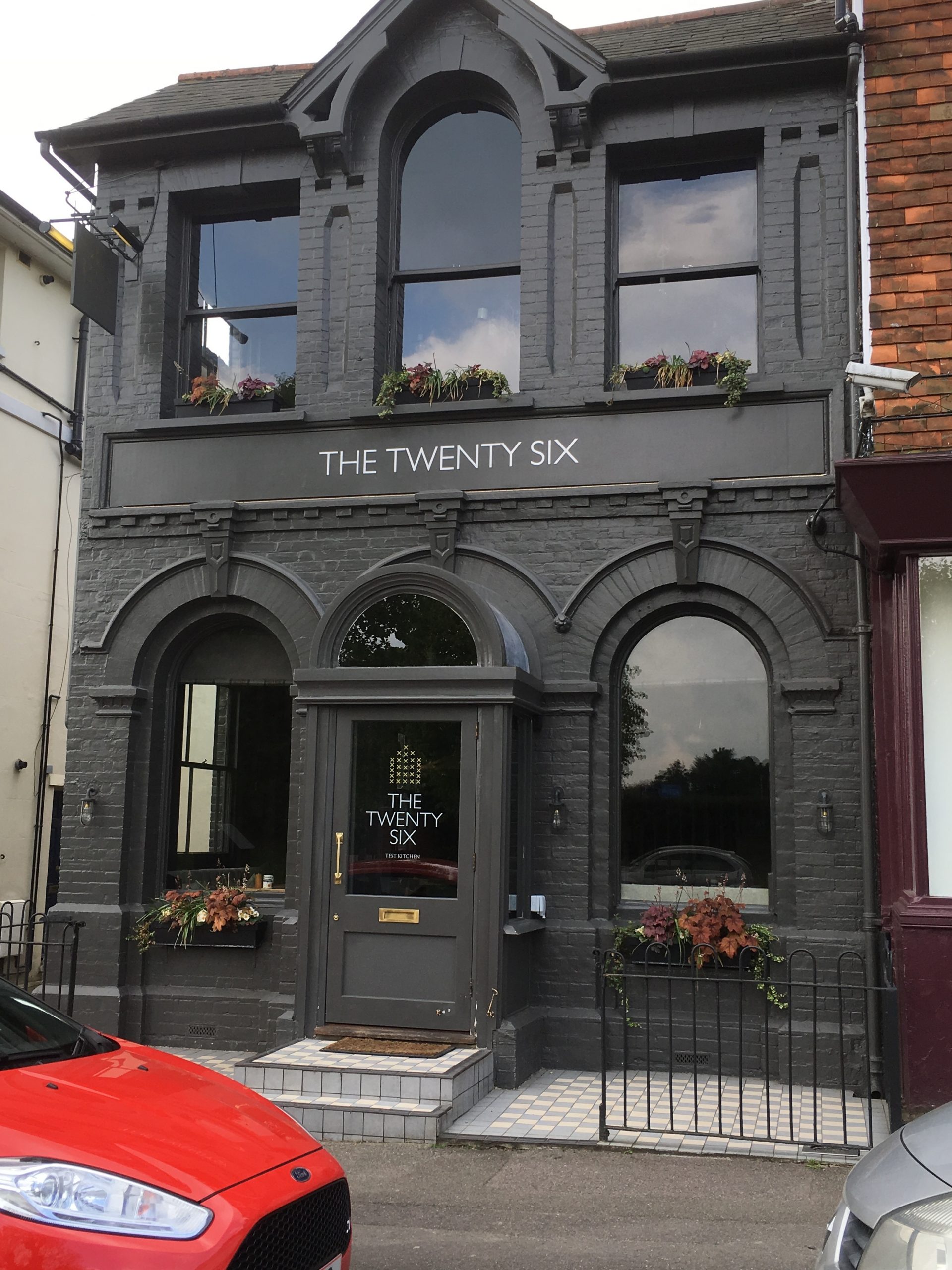 I know that this isn’t about somewhere on Tonbridge High Street, not even in Tonbridge!  But I wanted to review The Twenty Six as it’s just so good and well worth a visit.  And it is just up the road, really…

There is something very special about The Twenty Six.  I’m not sure whether it’s the austere facade that hides the beguiling interior, candle lit, intimate & hushed; or the informal, noisy, fun nights that I’ve had there whilst being served exquisite food.

The Twenty Six is a test kitchen, whereby the creative director & chef, Scott Goss, sources seasonal local produce to create his delicious menus.  The ‘test’ in test kitchen provides Scott and his team with free rein to experiment, allowing the diner to try ambitious & unusual plates.  The menu changes throughout the week, keeping diners on their toes.

The press release for the Twenty Six explains Scott Goss’s modus operandi: he wants diners to really savour the time they’re sharing with friends, a loved one, at The Twenty Six; his food is what has brought people together here but it doesn’t have to be the main event.  He achieves this conviviality by informality, no stuffiness just a lovely relaxed atmosphere with great staff.

When I visited, thanks to the size of our group, we were shown upstairs to the private dining room; opposite the kitchen, a room filled with dusk light when we arrived, the beautifully aged wooden table adorned with tea lights and linen napkins.

The menu lived up to expectations making it very hard to choose: broccoli & wild garlic soup; chicken terrine, pistachio, malt & green tea; loin of pork, broad beans, morels & black pudding??? Whilst deliberating, Scott brought us a zingy amuse bouche of avocado & wild garlic to kick off proceedings- smooth, garlicky but with a citrus tang to heighten our anticipation of what was to come.  (Scott popped in and out of our dining room throughout the night which adds to the experience.)

It was delicious & I could have eaten a lot more of it but, poor old me, we had to move onto the main course.  I chose the fillet of hake with crab, basil & sea vegetables.  The hake had sold out & it was substituted with sea trout which worked out fine.  This dish tasted of the sea but with a degree of finesse, the saltiness of the sea vegetables, samphire especially, coupled with the creamy texture of the flaky crab and the melt-in-the-mouth sea trout.  When I love a dish I eat very slowly- I definitely took my time on this one.

Between my friends and I, we chose most things on the menu, and the benefit of being a food blogger is that your friends let you try their food!  I was trying to be very critical but sadly, to no avail, the quality of taste and ingredient combinations was high across the board.

The dessert menu was very appealing but we decided to go down the post-dinner cocktail route, my choice being an espresso martini.  Our dessert abstinence was rewarded with another little treat from Mr Goss – beetroot wrapped in white chocolate.  Pure genius.

As I’m sure you can tell, I really like The Twenty Six.  The ambience, the food…it’s a restaurant of contradictions: fine dining*, informally; beetroot & chocolate.

* When I say ‘fine dining’ I mean dining which is fine; I understand that ‘fine dining’ often relates to Michelin starred and similar restaurants before anyone says anything! .

Whoops! Forgotten about Father’s Day? Here are some ideas…