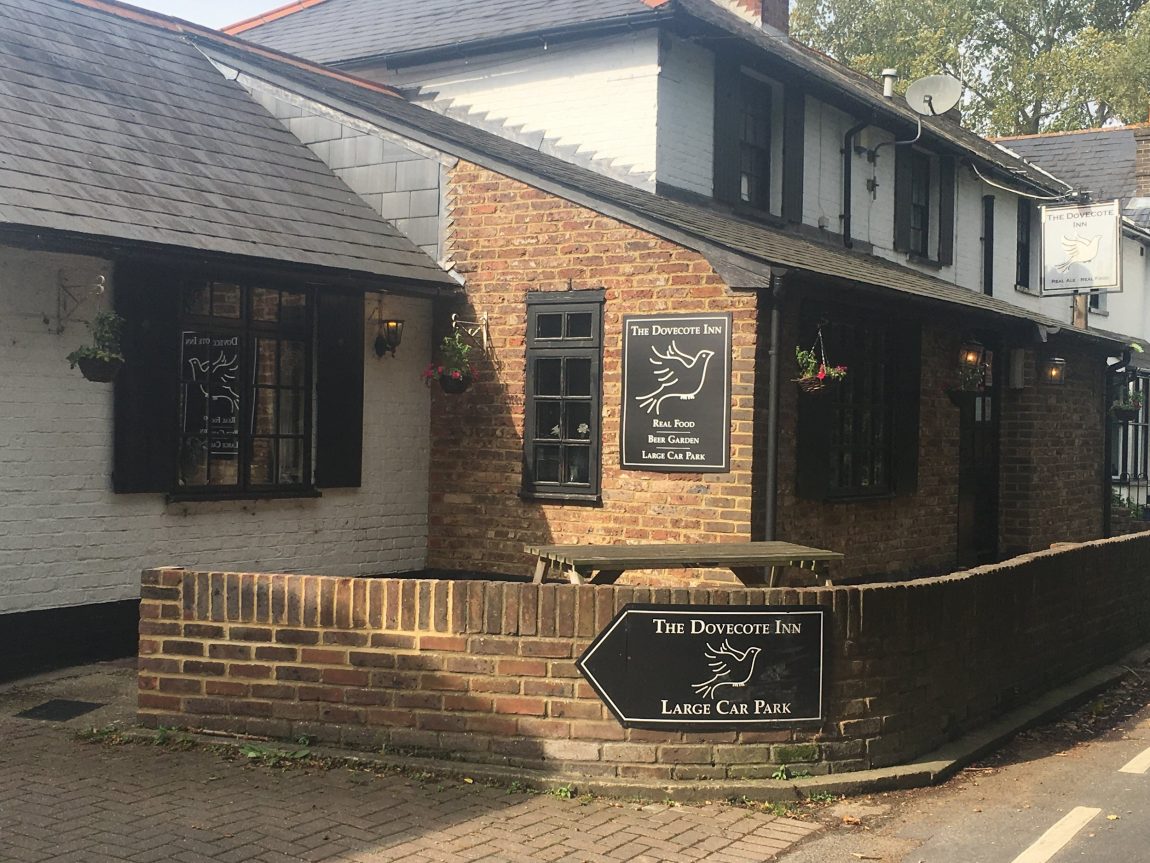 The Dovecote is hidden away on the road between Tudeley and Capel, almost blending into a row of cottages.  Mr EAT and I had a date night and as I was willing to drive, we decided to try somewhere further afield, new to us and somewhere that I hadn’t heard any of you discuss.  This very welcoming and homely pub was a pleasant surprise.

I rang in the morning to book a table and the chef took my booking.  He was very chatty and obliging, talking me through the menu, asking where we’d heard of the pub and, of course, taking my booking.  We were off to a good start.

We walked in that evening and I loved what I saw –  an archetypal pub carpet, horse brasses adorning the walls, no music, no TV and a smattering of presumably local folk at the bar and dining.  We received a warm welcome from the chaps behind the bar as we ordered our drinks: it’s worth mentioning that The Dovecote has been awarded a place in CAMRA*’s Good Beer Guide a staggering twenty times!  If you like beer and a traditional pub atmosphere, then this country pub would be a great spot to while away an hour or two.  When we visited, the barrels behind the bar offered Harvey’s, Young’s and Tonbridge Traditional.  The wine list was not as exciting but still there was a NZ Sauvignon Blanc on there which was good enough for me (but only the one of course).

The menu is traditional pub food, tempting diners with a wide range of dishes such as an all day breakfast (“Excellent idea!” said Mr EAT!), Moroccan lamb, steak and kidney pudding and fish and chips.  There is a specials’ board which featured lots of pies – the chef had earlier told me that they collaborate with a local pie maker, Simon Pieman, who makes the pies to their specifications.

I had the peppered garlic mushrooms to start which were creamy and delicious but, despite one of the behind-the-bar chaps serving our food with a faux French flourish calling himself Pierre (it was endearing not cringey I promise!) I was unsure about the presentation – inside a crusty, baguette roll.  I think slices of toasted sourdough might have been better or perhaps, the lighter option of Melba toast.  Mr EAT had the Thai fish cakes which were really tasty.

For our main course, the other chap behind the bar took on the part of the French waiter this time, serving me the Moroccan lamb, and chilli con carne for my date.  Both dishes were attractively served on boards with several interesting accompaniments, mine being a tahini dip and amazing falafel and harissa parcels, the highlight of the course!  The lamb was warming and familiar, with plump apricots and all the right spices (although I wasn’t sure about the olives), whilst the chilli con carne was comforting and the right kind of ‘chilli-hot’.  As I said though, the chef’s creation of falafel and harissa parcels were my Dovecote highlight.

Just as in a pub from my childhood, the desserts were written on a blackboard and passed from table to table.  They looked like desserts from my childhood too – lemon meringue pie and the like but we were replete and decided to pass.  The chef came out to have a chat with us and told us how they’re hoping to develop the menu.  There isn’t a children’s menu but the chef said that they would make anything off the menu in a smaller portion for little ones.  It was dark when we arrived but we could see a decked section outside with tables and a lawn which would be brilliant in the summer.  Behind the pub there are just fields so it would be lovely and peaceful on a summer’s day I’m sure.

The Dovecote lacks any pretension, is extremely welcoming and although you might feel as though you’ve stepped back in time a little, in this case, that really isn’t bad at all.  We will definitely return and take our sons to this very hospitable pub.

* CAMRA stands for the Campaign for Real Ale

Why Paul Hollywood might know me for all the wrong reasons….